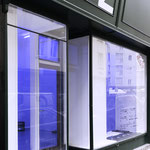 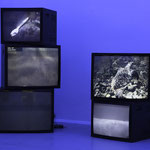 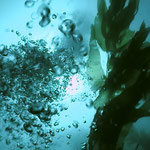 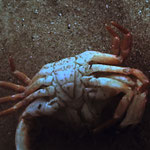 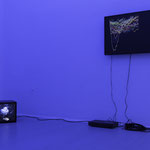 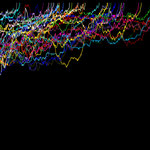 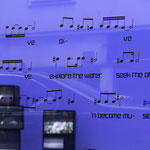 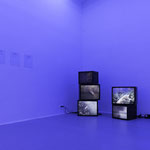 In the 7-channel video installation, 5 videos focus on what Tauber finds underwater: pollution, death, nausea, a beautiful sea turtle, and swaying kelp… A 6th video shows him disappearing into a cloud of air bubbles; and a 7th video shows a visual map of his 40 scuba dives, which slowly moves into existence from left to right in real time with the 51 minute musical piece.

The composition arises from depth readings recorded during every second of Tauber’s dives. Tauber assigned each dive an instrument and a beat and translated the movements of each dive in real time into music: the deeper the depth reading, the deeper the note. Sometimes, all 40 dives play together. Other times, a “band” of dives are heard. And, then there are moments when individual dives have “solos”. Tauber sings his dive depths (higher notes for the higher depths, deeper notes for the deeper depths) ("43 feet"... "80 feet"...) at various intervals to emphasize the relationships between his movements underwater and the music.

8 drawings of the musical notes and lyrics in the composition will surround the videos, and overhead neon blue lights will illuminate the space.

Participation in the show can happen both directly, by experiencing the installation and dancing to its music; and also remotely, by responding to the call to send personal stories about global warming, marine life, seas rising, and hurricanes to koenig2@christinekoeniggalerie.at These stories will be included in the show.